It’s certainly a relatively novel take on the whole E.T. thing. You all saw that instantly iconic “Goddamn Superhero” trailer back at the 2019 Game Awards, right? Cute little alien FU (pronounced “foo” – careful now) returns to earth 20 years after he was taken in and cared for by hapless Elliott-alike Damon Ricitiello (last seen in Travis Strikes Again: No More Heroes), but rather than having grown into any kind of altruistic “I’ll be right here” simpleton, FU is now an irascible, bloodthirsty intergalactic prince. And with Damon’s help, he’s here to take over the planet.

Now, Travis Touchdown isn’t having any of that, especially given FU’s propensity for hurting his friends. So it’s once more unto the lurid, deeply divisive breach as you plunge headfirst into a brand new, full-featured No More Heroes experience. Far from the quarter-measure of Travis Strikes Again, this is a masterfully-drawn pint of gaming stout, though you may find there’s a little bit of a head on it. 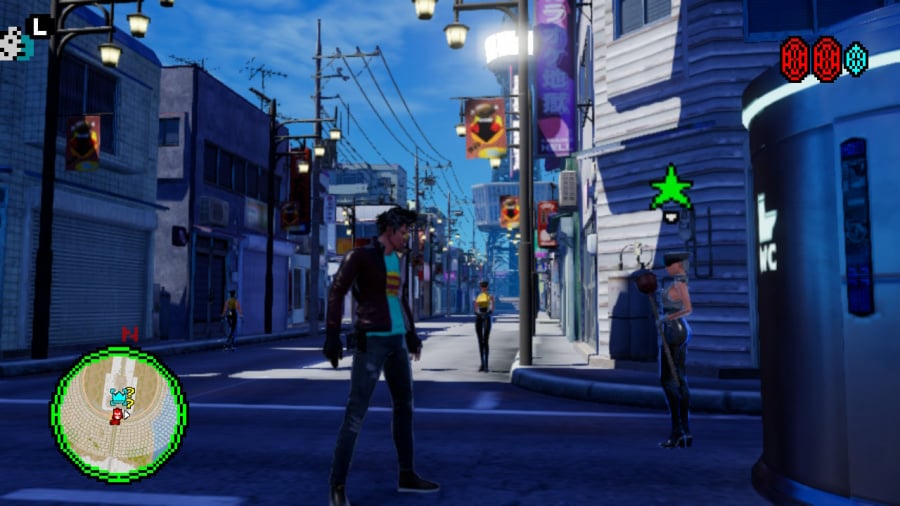 See, No More Heroes III has a bit of a timing problem. That is to say, the series is a joke. Don’t get upset – we don’t mean that like it’s bad. We mean literally, the series is a joke. It’s a comedy, it’s a satire. Check our reviews for the original No More Heroes and its direct sequel – we get the joke, and we enjoy the joke. The issue is that there’s only so many times you can appreciate even the wittiest bon mot before it begins to come off as stale, as hacky. And we fear that this third revue may be a jape too far.

That’s all a matter of perspective, of course. The elements that make No More Heroes such an arresting series are all here – the challenging, hyper-kinetic boss battles, the relatively menial volunteer jobs, the constant fourth wall breaks. It is shockingly violent in places, with FU making things personal early on leading to a sense of real and spectacular menace.

The spookily-empty open world of the original No More Heroes has made its return here – though now divided into multiple islands and with the convenience of fast travel — with Travis navigating it with his flashy, Akira-style bike. It’s an interesting decision to return to the structure of the original game as it was one of the most criticised aspects of the experience. Here, you’ll rocket around the map taking part in “Designated Matches” (simply arena fights with various different enemy types) in order to earn enough money and clout to enter a Ranking Battle with one of the higher-ranked Galactic Superheroes. Again, the mini-games you’ll need to play to earn enough to progress are routinely quite banal, though not in the pointedly awful way they are in the original game. In a sense, this actually makes things worse because the sheer boredom of, say, the lawn mowing task in No More Heroes 1 gave the intended satire a much sharper edge. The same task returns here, but it’s been made smoother and faster – overall spruced up, which simply begs the question why they didn’t just… put something genuinely good in there, instead. The game’s is structured in a breezy enough way, it’s just repetitive and at times you’ll wish for a bit of a shake-up. 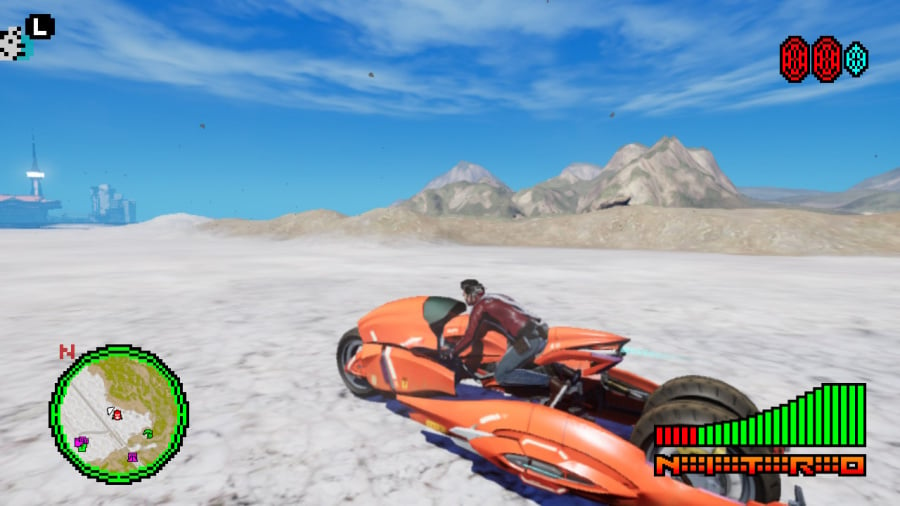 It’s an unusual halfway house between the original’s arduous-but-artful progression and No More Heroes 2’s pared-back, super-fun NES-style mini-games. A sidequest that sees you mining for currency via small, maze-like dungeons is sort of vaguely fun-ish, but there didn’t seem to be any point to it. You could argue that it’s mining for coins, akin to cryptocurrency, perhaps, but… why? The original game was confrontational, aggressive in its theming. No More Heroes III isn’t. Unlike its predecessors – even the lesser Travis Strikes Again – it’s just a game.

And that’s not a bad thing! Not in and of itself. Because the combat here is slicker and more enjoyable than ever. It helps that the Switch pumps the combat sections out at a near-as-damnit locked 60 frames per second even in handheld mode. The open world is notably less smooth, but it doesn’t matter as much as the on-foot battles and thankfully these are a ceaselessly enjoyable experience. Enemy patterns are diverse, interesting and challenging – Designated Battles mix up the different foes in marvellously devious ways, meaning you’ve got to concentrate and switch targets with aplomb even on easier difficulty settings. This is easily done with ‘ZL’ locking onto enemies and a quick flick of the right stick changing your target. We mostly played the game with the traditional button controls (all the better for handheld gaming!), but the Joy-Con motion option remains available and as enjoyably visceral as ever. 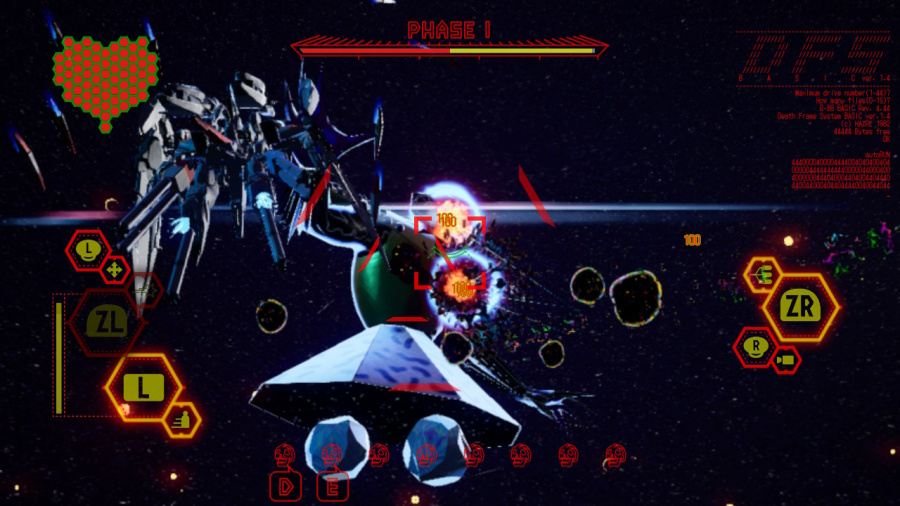 Atop the usual suplexes, beam katana combos, spinning slot reels and finishing blows, Travis has brought over the Death Glove from Travis Strikes Again, allowing him to use special new abilities such as a powerful dropkick, a floating turret and a contextual time-slowing move. Special chips for the glove can be crafted back in Travis’ apartment at Santa Destroy, again consolidating what was a time-consuming feature in the original game into a breezier effort here as all the game’s upgrade systems are accessible from a single room. Another new feature is Travis’ “Full Armour” mode, which sees him take to the skies and battle in deep space using a sort of Gundam-esque mecha suit. These battles are pretty simplistic, with you holding ‘ZR’ to lock onto multiple enemy targets and releasing to fire, but the game feel resembles the rather brilliant Zone of the Enders and this vaguely Star Fox-esque action is a nice little change of pace.

It’s all very visually striking, with garish effects and the series’ trademark hyper-stylisation present and correct. As mentioned, the frame rate is rock-solid during combat, but it tanks a little out in the open world. The visuals are also lacking in sharpness, especially in handheld mode which can look downright sludgy at times, but never enough to pull us out of the game. Thanks to a thoroughly twisty-turny quirky narrative, we found the game consistently compelling – strictly no spoilers, but the story swerves more than an episode of WCW Monday Nitro, and in directions we never could have anticipated. There’s some excellent music to enjoy on your journey up the rankings, too; we never grew tired of the victory music when we beat a Designated Match. 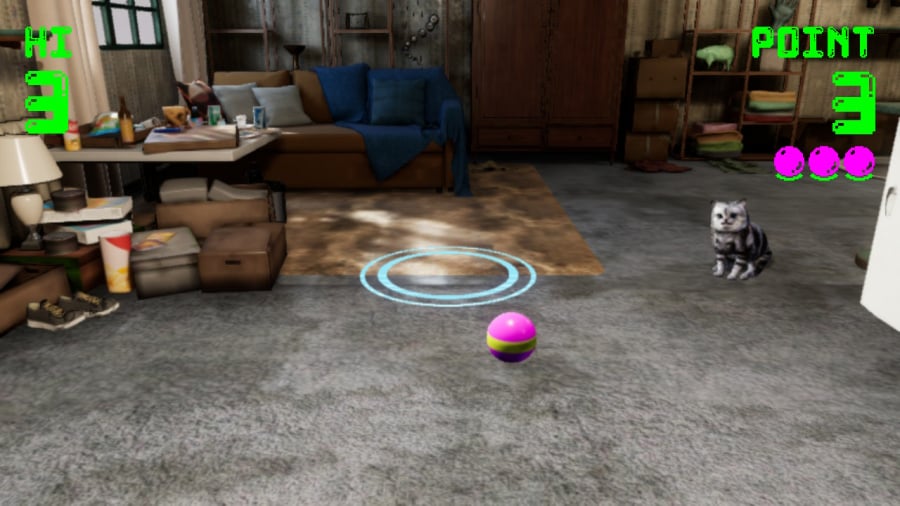 Which brings us to that oh-so-sticky of sticking points, the score. No More Heroes and its sequel both got 9s, but for different reasons: the original for its punk rock disregard for convention, its absolute dedication to its themes, its crystallised hot-blooded defiance; the sequel for its vastly improved action, superior quality of life touches, better and more frequent boss battles – despite losing some of its resonance and identity in the process. This swaggering third entry has fantastic moments and is bound to satisfy invested Touchdown fans, but ultimately comes in third place for us.

No More Heroes III has the faults of both its mainline predecessors – it’s a little more tedious than No More Heroes 2, and a little less meaningful than No More Heroes. It makes up for this, however, by being another inarguably impressive, balls-to-the-wall carnage-fest, a blood-spattered love letter to excess, and a Suda51 fan’s wet dream splashed across the Switch. The story it tells is cool. The game it plays is cool. Neither of these crucial aspects reach the heights of the series’ Nintendo Wii origins, but nobody who truly gets No More Heroes could reasonably be disappointed with this third incarnation. The joke’s beginning to wear thin, but it’s all in the telling. And Suda51 can still spin a very fine yarn.

Summer Game Fest: Dates, Conference Times, How To Watch, Everything You Need To Know